The Castell’s or Human People towers are a famous Catalonian tradition which dates back to the 18th century.

A small child has to stand on the top to complete the tower and the teams wear similar colours and their names are often from their hometowns.

Teams stand on each other’s shoulders in an effort to build the highest human tower.

There are many competitions that the Castells get involved in, including St Johns festival in June, and St Ursula’s Day in October where teams from all over Catalonia compete.

In May, Mollerussa, Catalonia celebrates their Festa Major.

It began on the 17th and finished on the 20th May and is a yearly tradition and each town has their own version. 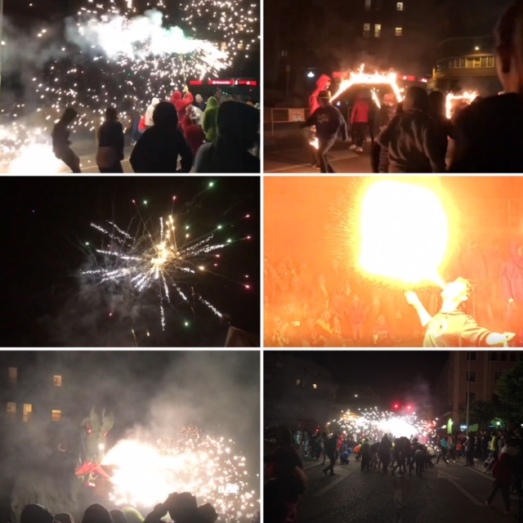 Hundreds of people came to Mollerussa’s town centre to celebrate the event. Each day has different musicians and events with Sunday ending with a big firework display.

Festa Major meaning big party kicked off the event with an impressive firework display and correfocs which means fire and run.

I really enjoyed the festival and thought the atmosphere was amazing to be a part of.

The 29th of May 2018, the residents of Catalonia celebrated the annual Catigat Pla D’Urgell bike race. There were three different stages and thousands of people took part.

It celebrates its 11th year and the community spirit was on a high.

Thousands of people took part in the race including adults and children. Once the race was finished, people enjoyed local food, drink and some were given awards.

Mollerussa has two museums, one of them is the Paper Dress Museum which tells the story of the dresses celebrated for the last 50 years. While you are here, you can see famous faces from the UK and Catalonia and discover the traditions and culture along the way.